Previously I mentioned why just relying on sequence coverage is not a good idea as it is possible to have 100% sequence coverage but not 100% code coverage. However I only described a scenario that used a branch that had 2 paths i.e. the most common form of the conditional branches, but there is one other member of the conditional branch family that exists in IL and that is the switch instruction; this instruction can have many paths. This time I am using the code from the Newtonsoft.Json library because a) it has tests and b) it is very well covered at 83% sequence coverage, but only 72% (by my calculations) branch coverage. The subject of this investigation is BsonReader::ReadType(BsonType) this method has a very large switch statement, that actually is defined as a switch statement in IL, with a default and several fall-throughs; a fall-through is where two or more case statements call the same code. The method itself has 98% sequence coverage and 82% branch coverage; the only code that is uncovered is the handler for the default: path.

which is not unexpected as it is a handler for an Enum which should not be set to any value that is not part of the allowed values. Looking at the branch coverage report we have the following results (the switch instruction we are interested in is at IL offset 8. 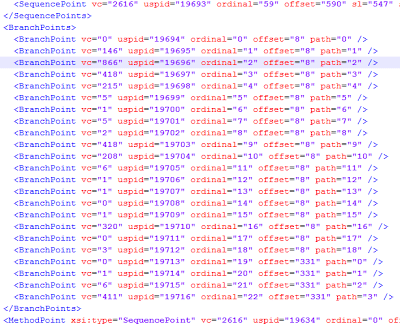 Now the first path (0) is unvisited, but we knew that, so the next unvisited branch is #14 and the next is #17; luckily for us the enum in question that is used by the switch instruction is well defined. 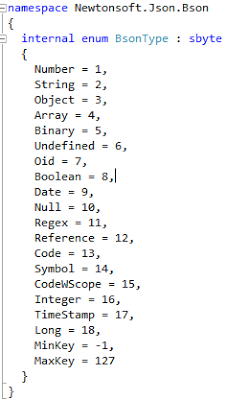 And as such we can thus deduce that the method is never called during testing with the values Symbol and TimeStamp but the code that they would call is covered; in fact we can see from the code that both these enum values are part of the switch/case statement and are part of fall-throughs. So again we see how branch coverage helps identify 'potential' issues and test candidates.

Sequence coverage is probably the simplest coverage metric, the information is packaged in PDB files and can be read using tools likeMono.Cecil [http://www.mono-project.com/Cecil], but just because a method has 100% sequence coverage does not mean you have 100% code coverage. I'll use an example from OpenCover's own dogfood tests to demonstrate what I mean. Here is a method which shows that it has 100% coverage (sequence point that is). However I see an issue and that is that on line 101 the